Around 40% of farmers visiting waste recycling firm Agri.cycle’s stand at Cereals 2007 still hadn’t decided how they were going to dispose of waste farm plastics, according to the firm’s David Kent.

It confirmed Agri.cycle’s pre-Cereals view that a significant proportion of growers hadn’t made provisions yet despite the 15 May cut-off for incineration of pesticide containers, he said.

“There wasn’t a stampede to the phone around the deadline. The biggest issue was where growers had assurance scheme audits shortly after the deadline and thought they should have something sorted.”

FarmXS’s Mark Webb agreed there was still a lot of farmers who needed to join a scheme. “The largest firm Solway Recycling says it has 22,000 farms signed up, but there were 121,000 claimants of single farm payments. Even taking out the really small farms it leaves an awful lot of farmers out there.” 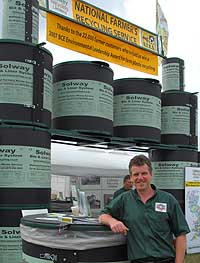 John Howe of Agriforce reported a steady increase in sign-ups. “I think since 15 May farmers are realising just how much waste they produce.”

Manufacturers still needed to do more with their packaging to make it easier to recycle, Mr Kent said. “For example, Dow’s chlorpyrifos comes in a foil package. It’s neither paper or plastic so its difficult to recycle. Our advice with that is to isolate it, store it in the spray store. We will take it as part of our service, but it needs to be land-filled.”

In contrast, Makhteshim-Agan’s min-rinse packaging was excellent. “It reduces impact on farm and costs.

The bag, which looks like a giant fertiliser or seed bag, holds around 1300-1400 non-crushed cans, according to Mr Kent. “Based on the average farm using 1.5 cans / acre / year it holds a year’s supply of cans from around 850 acres.”