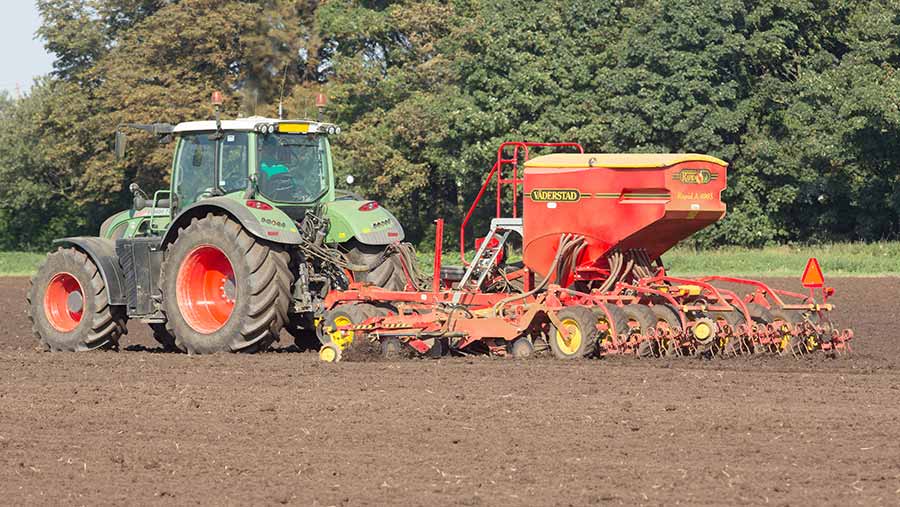 The shift to later drilling of winter cereals is helping growers prepare for the loss of a key neonicotinoid seed dressing next year as well as assisting with the fight against blackgrass.

The threat to crops from barley yellow dwarf virus (BYDV) will be heightened with the loss of the neonic clothianidin, as used in Deter, so alternative methods are being tried such as later drilling and destroying any green bridges.

This will have the knock-on effect of helping with blackgrass control, as growers face a future with a diminishing number of actives to deal with troublesome pests and weeds.

At the Royston ploughing match on 19 October, it was noticeable that there were a few regular competitors missing.

While this wasn’t brilliant for the support of the event or the social side of things, it was great from an agronomic point of view as they were all busy drilling whereas in previous years they would have been drilled up by that time.

The site was perched on top of a hill with decent views across the surrounding farmland, and where usually the view at the match is that of a mostly green landscape of emerged cereals and oilseed rape, the view was dominated much more with brown fields.

I know that this in part has been down to the kind weather we’ve had this autumn, but most farmers (certainly locally) are heeding advice and drilling later to combat blackgrass.

This is going to be more important with the loss of clothianidin as a seed treatment, illustrated this week as aphids have been readily found on emerged cereals.

Where early-drilled cereals have been treated, aphicides have been lined up to coincide with the drop-off in persistence of the seed dressing. Where a top-up of flufenacet is needed, this will be tank mixed with an aphicide.

In the next few weeks, attentions will turn to the establishment of winter beans.

Seed has run short this year, and it is tempting where ordered seed hasn’t materialised, or wasn’t available in the first place, to fill the drill from the heap still sitting in the shed.

Before doing this please get this seed tested. My main worry is the abundance of tests coming back with high counts of stem nematode.

Stem nematode had a good year as they prosper in wet seed-beds such as we had in the early spring.

If you drill infected seed, please be aware that you’re probably writing-off drilling beans in these fields for the next 20-25 years at least to cure the problem.

Warm weather to date has allowed rapid emergence and establishment of winter cereals.

Oilseed rape crops have finally decided to grow quickly, which in most cases has allowed them to grow away from cabbage stem flea beetle damage.

The good spell of recent dry weather has rewarded those who held off from drilling wheat early.

These later-sown crops have the added bonus of good seed-beds, which will give every chance for blackgrass control to be as high as possible.

Earlier-sown wheat crops are receiving early post-emergence herbicides where blackgrass or ryegrass are the target weeds.

Volunteer beans are causing an agronomic headache as most residual herbicides for blackgrass control have little effect at killing them.

The priority remains blackgrass control, with the volunteer beans to be dealt with later. In winter barley, the main part of the blackgrass programme is now complete as there are no contact-acting herbicides to rely upon later in the season.

Pest pressures in winter wheat and barley have a different focus compared to last year. Slug pressure has been low in most cases, yet aphids have been easy to find in cereals as the warm weather has been ideal for their arrival into crops.

With the seed dressing Deter having its last season of use, it is a real shame it will no longer be available.

It should provide aphid control for six to seven weeks after drilling so in many cases no foliar insecticides are likely to be required.

Attention quickly moves to another large problem – blackgrass in oilseed rape. Timing clethodim for blackgrass control has proven difficult this autumn as some blackgrass emerged early with the crop, but with the dry weather a lot has only recently emerged.

Where Clearfield herbicides have been applied, it has been very satisfying to see weeds such as charlock being well controlled. With Belkar (halauxifen + picloram) now available there are a good range of different weed control options – a statement I have not been able to say for several years.

Since last writing we have pretty much had the perfect autumn for planting and establishing the new crop.

Much of the wheat has been planted after maize, which came off early and in good order, although yields were variable depending on moisture availability through the summer.

With a mild autumn and early drillings, the primary threat to crops this autumn is inevitably going to be BYDV.

Crops planted without Deter seed treatment should be receiving an aphicide imminently and will probably need a follow-up in November.

With earlier planting and rapid growth we should be working on the shorter period of cover from Deter seed treatment, meaning that many crops treated with Deter will also require a spray treatment for BYDV.

Oilseed rape crops have generally established well and put on good growth. With dry weather and large plants it is probably fair to assume that phoma risk is currently low.

We will soon need to see colder weather to harden off all crops and prevent them getting too proud.

The last thing we want to see is a large canopy of limp, soft growth and to have a fall of snow on top of it as it will soon start to rot.

The forecast is for colder weather at the start of November and this should be a big help.

Most cereal crops have received their pre-em herbicide. Along with the dry conditions there has been very little emergence of weed following these treatments, so it is a little early to know how much subsequent grassweed emergence we are going to get.

By the time of my next contribution, autumn drillings should be complete and thoughts will be turning to spring cropping.

Following the dry summer, I would be expecting supplies of spring barley seed to be tight so early ordering may be wise to ensure getting first-choice varieties.

Well the rain arrived and went away again, causing a very minor break in what turned out to be an easy drilling schedule. Most cereals have gone into seed-beds, the likes of which I haven’t seen for many years.

Fine, firm, level and, for the most part, absolutely bone dry.

We had very little opportunity to get a flush of grassweeds pre-drilling for most of this autumn’s sowing (even when the drilling was delayed until well into October) and unfortunately some of the earlier-drilled wheats have had some fairly healthy-looking blackgrass emerge with the crop.

In situations like this I really have no choice but to go back in with the dreaded ALS inhibitor contact materials and hope that the reasonable results we have been getting in this part of the country will do their best.

It has often been said that it is better to put these materials on going in to a hard winter than coming out of one. All we need now is a hard winter.

Over the past couple of weeks we have now had enough rain to bring things “back to normal”, although we are still nowhere near field capacity. I have never seen Hampshire’s chalk streams so low for this time of year.

Crops are still going in incredibly well, anything drilled in the past two weeks did get a sprayable flush of blackgrass, and hopefully the moist (and slightly cooler) soils will enable the residuals to work more efficiently.

It’s a shame that everybody couldn’t have drilled their whole cereal area within a three-day window last week.

Oilseed rape now seems to be allowing us to sleep better at night. In fact, I’ve been asked quite a lot over the past couple of weeks “Is it too far forward?” The answer is no. Oilseed rape that is knee-high going into my longed-for hard winter is a nice problem to have.