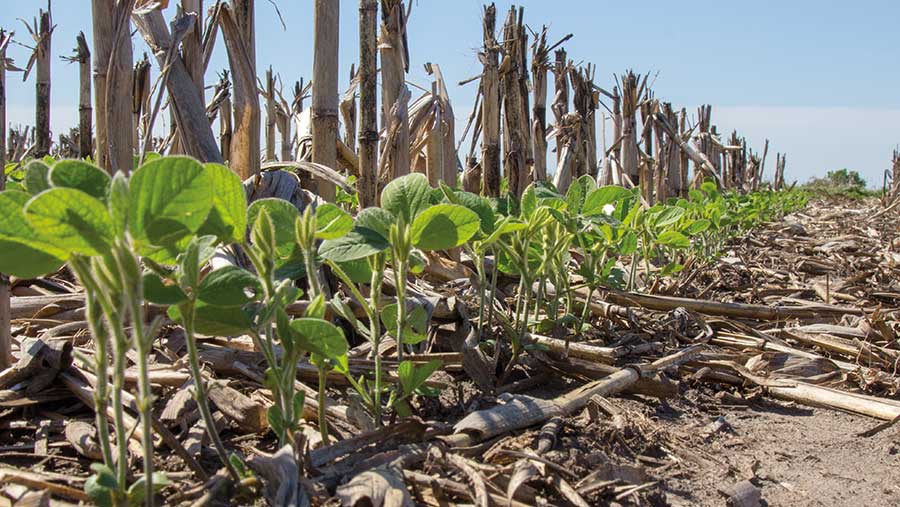 Very few farmers have so far been paid for sequestering carbon within an arable rotation, but opportunities are beginning to open up, both globally and in the UK.

Carl Krefting, who farms about 400ha at Showsley Farm, near Towcester, Northamptonshire, is one of the first in the UK to enter into a project where commercial companies are paying for both carbon offsets and additional ecosystem service benefits.

The pilot project, due to run for at least five years on the farm, is with Dutch start-up Soil Heroes, set up by Dutch farmer Jeroen Klompe.

He has 10 years’ experience of farming regeneratively on his own farm in Hoekschewaard, south of Rotterdam.

After finding success on his own farm and recognising the potential that soil health improvements have to solve global issues of climate change, biodiversity loss and water quality, he started Soil Heroes.

The project aims to motivate and incentivise other farmers to improve their soils with funding through additional income streams paying for improved ecosystem services.

The Showsley Farm pilot is the first such project in the UK for Soil Heroes, following others in the Netherlands, Germany, Belgium and Austria.

“All three companies are young, innovative and conscious of their footprint. They want to offset their carbon footprint through the Soil Heroes platform, and are willing to pay a little more to stimulate biodiversity and water retention on top,” explains Mr Krefting. “It’s what I call carbon plus plus.” 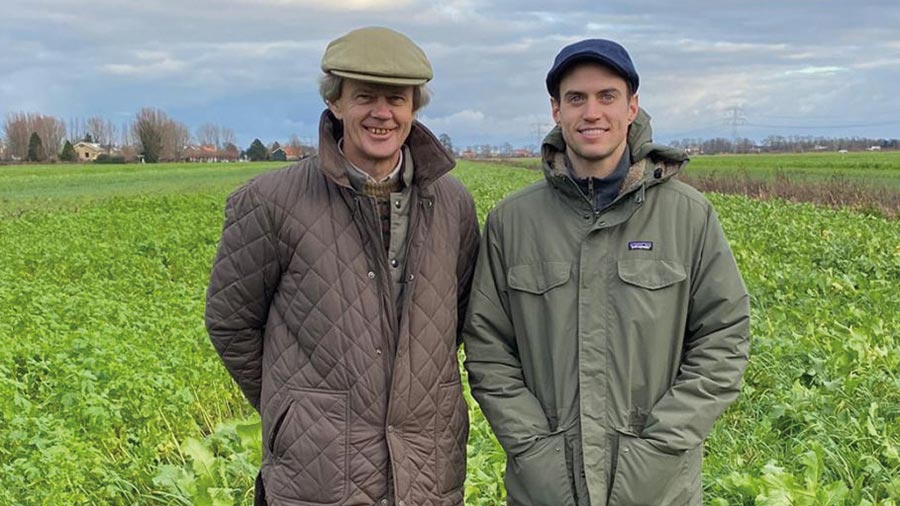 About 100ha have been underwritten in total by the three companies, initially for a one-year trial, with a view to committing for five years.

As a minimum, Mr Krefting must establish crops using reduced tillage and grow cover crops with at least five different species, but he intends to use the payments to take his regenerative approach to the next level, he says.

That will include using cover crops throughout the farm, using biofertilisers and organic manures based on Soil Heroes knowledge to reduce chemical inputs, and replanting all field margins with bird feed and pollinator mixes.

He also will tap into the Soil Heroes network to access mentoring and advice on adding further regenerative practices.

A set of different soil tests to measure physical, chemical and biological conditions were carried out at the start of the project – time stamp zero – which is the basis point for calculating improvement in soils and providing other ecosystem services.

The change in ecosystem services from those practices is calculated on a yearly basis using a model developed by Soil Heroes. It is is a hybrid of several other existing carbon models to increase reliability, but specifically focuses on soil carbon at a plot level.

After five years, the same baseline tests are repeated – time stamp five – to check whether the model’s calculations have been achieved.

By calculating the change on a plot level, Mr Klompe says those farmers making the best efforts get rewarded the most, effectively making the scheme competitive. “We want a system that empowers and motivates farmers to get the best out of their soil health.”

Based on the model’s current calculations, if Mr Krefting carries out all the practices envisaged, the total carbon sequestration and avoidance should be between 3-5t carbon dioxide equivalents a hectare each year over the five years, Mr Klompe says.

As part of the time stamp measurements, soil samples are independently analysed by a laboratory. Mr Krefting says this verification gives extra confidence in the authenticity of the credits.

But as yet, the firm doesn’t have third-party certification with one of the recognised bodies, Mr Klompe admits. “We hope to have it in place by the end of the year, as some of the big buyers demand it. We’re working with Verra and ISO.

“The end goal is for the model to be so transparent that we don’t need certification,” he stresses.

“The investment in and cost of certification is huge, and we want to make sure that money flows to the farmer. We are selling trust. We have a direct relationship between the farmer and buyer – they know each other, so it is very easy for both parties to know the truth.”

In addition, extra payment is made for a certain amount of intensive biodiversity on the farm. “There is already a price for ecosystem services. Carbon is the driver currently, but the next big thing will be biodiversity and, after that, water,” says Mr Klompe.

Unlike most voluntary carbon credit schemes, Soil Heroes facilitates a direct relationship between the credit buyers and farmer, which allows for information exchange and a potential route for a direct market for the farm’s products.

“All three companies said they are looking at their ingredient sourcing and asked if we would be open to growing something for them,” says Mr Krefting. “That adds another dimension and possible long-term relationship.”

While Mr Krefting isn’t willing to specify how much the payment will be, he says it will make a significant contribution to replacing his Basic Payment Scheme payment in future.

“Our goal is to decommoditise carbon payments, because we are talking about carbon plus plus,” Mr Klompe concludes.

Regenerative US farmer shut out of opportunity in US

Iowa grower Mitchell Hora hasn’t signed up for any of the various voluntary carbon credit schemes emerging in the US, not because of any lack of interest, but because he doesn’t qualify for the schemes.

Farming 280ha in south-east Iowa, the farm started no-tilling maize in 1978, has been 100% no-till for soya beans since 1986 and intensively using cover crops for the past six years.

That has brought considerable benefits from more biologically active soils, in which organic matters have increased by 1.3% over the past 10 years, and 10cm of water can infiltrate in less than five minutes.

As a result, Mr Hora has been able to reduce pesticide and synthetic nitrogen inputs by 50%, while still producing yields that rival his more conventional neighbours.

But because most schemes require farmers to be doing something new or additional to qualify, he is currently shut out from signing up.

“The way the rules are written, it rewards farmers who are making changes to add cover crops or reduce tillage for the first time. It’s effectively set up on a cost-share basis to enable those changes,” he says.

While that could help drive a wider and potentially faster transition, it doesn’t reward the early adopters from whom those farmers are likely to learn.

Mr Hora is also concerned that it could foster schemes that are more about box-ticking than rewarding genuine farmer innovation and carbon sequestration.

The extent to which you are sequestering carbon within one of those boxes can vary massively. We don’t want farmers to be able to do the bare minimum, check the box and not actually sequester carbon, and still get paid.”

Instead, Mr Hora is lobbying for schemes that measure change on an annual basis.

“It’s completely wrong that these schemes are quantified based on practice change, and paying what the model says is your top-line carbon footprint change.

We should be looking at what is that farm’s actual net bottom line in carbon sequestration.

“Farmers already using these techniques have the microbial communities built up to foster cover crops and diversity in the systems.

At that point your system is functioning, and the additionality is the new carbon your cover and cash crops are pumping into the soil on an annual basis that builds up over time.

“If we can get more photosynthesis going, more diversity to stimulate more microbes and continuously reduce tillage, it will have a better net effect than only looking at the change in practices.”

Annually measured projects would foster both innovation and competition between farmers to produce the highest carbon sequestration, he says.