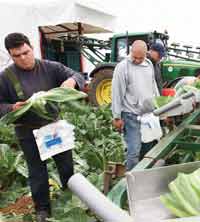 Minimum wages for agricultural workers will increase by 2.4% from October after negotiations by the Agricultural Wages Board.

The NFU said the increase was “challenging” for farmers and growers and called on the coalition government to abolish the AWB as soon as possible.

“We appreciate that the cost of living is rising for farm workers as it is for employers,” said Meurig Raymond, NFU deputy president.

“We also want to make sure that the farming industry is seen as a stable and fair paying industry.

“Salaries must be market driven. The proposed award sits between inflation forecasts yet exceeds current levels of average pay growth across the economy.

“We expressed real concern to the board about the pressures that many businesses are facing, particularly in the horticultural sector, one of the biggest employers, with several companies having gone out of business this year already.”

Branding the AWB an “industrial relic”, Mr Raymond said it had no place in modern society.

” It serves no other purpose than to add cost and complexity to farmers and growers,” he said.

“As an example of absurdity, a farming business may employ workers in a vegetable pack house at national minimum wage yet be forced to pay the same workers an extra two pence per hour for harvesting the crops.

“I am therefore calling on the government to scrap the Board at the earliest opportunity.”