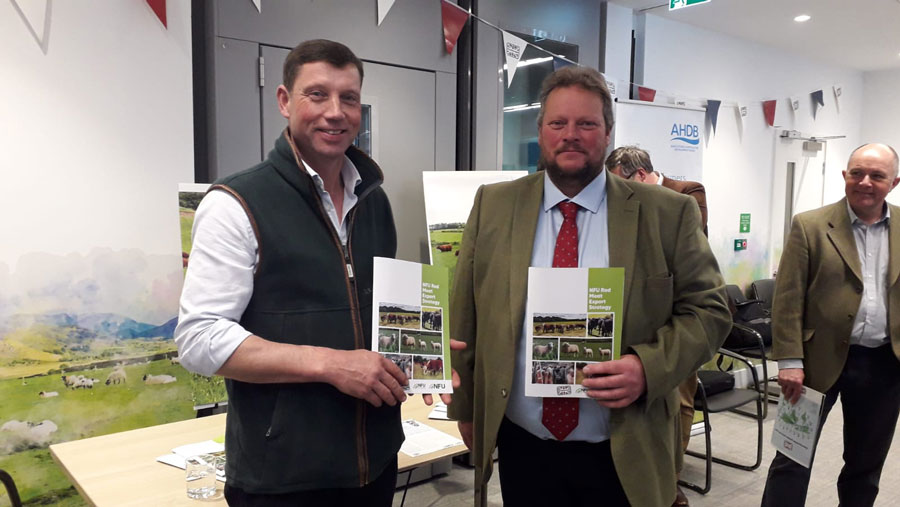 The NFU has called for government to invest and work with British farmers to help maximise their red meat exports in an increasingly competitive trading environment.

The UK government is seeking to sign post-Brexit free trade deals with countries such as Australia and New Zealand, which will see British farmers go toe-to-toe with some of the most export-oriented producers.

See also: What does the future hold for UK beef farming?

But the NFU has warned that unless British farmers receive the right support from government, through effective market development and targeted export promotion of high-quality, high-welfare British food, they will be outcompeted by producers from other nations.

NFU Livestock Board chairman Richard Findlay said: “We are asking government to match our ambition to increase our exports by 30% by 2030, and the red meat strategy is part of this.

“The timing is now. Farmers have rightly been defensive about the free trade agreements (FTA) the government is striking with Australia and New Zealand, particularly for agriculture. But there are other FTAs being negotiated where there are great opportunities [for exports].

“The government has said they will help us become some of the greatest exporters in the world. They need to start putting their money where their mouth is.”

Mr Findlay would like the government to match fund the AHDB’s annual £6.6m spend on marketing and promotion of UK food exports, which gives a return of £11.90 for every £1 spent.

He also wants the government to increase the network of agri-food and drink attachés to be placed in key global markets to promote trade and boost exports. Currently, there are just two, but the government has promised a further eight.

“British livestock farmers can’t compete on price alone, but we have to explain to exporters why we are the best in other areas, such as environmental sustainability and animal welfare,” said Mr Findlay, a hill farmer in the national parks of the North Yorkshire Moors.

The strategy says the global appetite for meat shows no sign of slowing down. This is largely driven by population growth and an increase in middle class diets.

Almost 89% of UK total beef trade and 96% of UK total sheep trade is to the EU. Target markets for future market development include countries such as China, the US, the Gulf and Japan.

Commenting on the report, a Defra spokesperson said: “There are huge opportunities for our livestock sectors in overseas markets, with more than 550,000t of sheep, beef and pig meat shipped in 2021.

“The US market will soon be open to UK lamb for the first time in over 20 years, beef exports have already commenced, and we have recently gained access for UK pork to the Mexican market.

“We have announced 10 agri-food attaches in key priority markets to boost exports, and we are working closely with the NFU and AHDB to continue unlocking export opportunities for British agriculture.”

David Barton runs a 103ha mixed arable and beef farm in North Gloucestershire, and is vice-chairman of the NFU Livestock Board.

His native breed cows are reared and bred for beef production predominantly on a pasture-based system, which he says “is the envy of the world” and increasingly emulated by other countries striving to reach net zero.

Mr Barton uses selective breeding to optimise growth across the herd and has also introduced multi-species herbal leys and rotational grazing to improve the nutritional content of pasture.

“The cattle that I produce firmly enhance my farm, increasing soil fertility, improving soil health, and optimising the sequestration capacity of my grassland,” he said.

When asked about his key demands of government, Mr Barton said: “We need government to step up and form a genuine working relationship with farmers.

“Market intelligence and knowledge transfer is important and we need a constant supply of high-quality product if we are going to be successful.

“British livestock farmers are ranked number one in the world for animal welfare and environmental standards. It’s essential that these standards are not undermined on our home market by imports produced to a lower standard.”