Taking 16% of his arable land out of production and introducing measures which will improve the farm’s natural capital are how West Sussex grower Mark Chandler is preparing his arable business for the Environmental Land Management (ELM) scheme.

Instead of extending an existing Higher Level Stewardship (HLS) agreement for another 12 months, he has opted to use Mid Tier Countryside Stewardship to fund the landscape scale changes that he is making at Moor Farm, near Petworth.

These include creating linear habitat by establishing in-field flowering strips to encourage beneficial insects, using overwinter cover crops ahead of spring cropping, making the best use of two-year legume fallows on unproductive ground, and creating areas of wild bird cover.

In the process, he’s had to move away from a 50% winter wheat mentality. But it is also allowing him to eliminate insecticide use, improve his soils, solve grassweed issues and prepare for the removal of Basic Payment Scheme (BPS) funding with confidence. 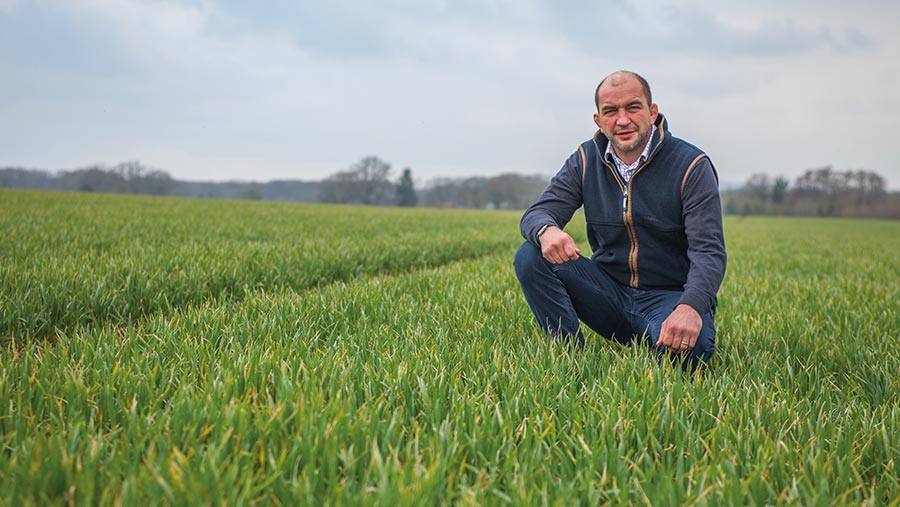 Having seen the writing on the wall back in harvest 2018, he and his father, Richard, realised that it was time to consider changes.

Pest and weed problems were getting worse as agrochemicals were lost, extreme weather was creating difficulties with soils and Brexit’s financial impact was looming.

“At that stage, we asked ourselves whether it was just a bad year or if we needed to change,” recalls Mr Chandler.

Analysis showed that there were too many weaknesses in his system – from the cultivations strategy and four-course rotation, to the farm’s rising machinery costs, resistance build-up and exposure to climate change.

“Even our HLS scheme, which was providing us with funding, was holding us back by stopping us from doing something different.”

But the detailed analysis also showed him that the key components of natural capital – soil, air and water – were things that he could have an effect on. And these were the likely components of a “public money for public goods” system, that Defra was proposing.

“It was clear that doing nothing was not an option. We had to find solutions.”

Having already had control difficulties with resistant cabbage stem flea beetle in oilseed rape, he was committed to not using insecticides anymore and hoped to get some biological control from natural predators.

The strips were established 100m apart, accounting for 6% of the field area and creating habitat in a productive arable field, rather than round the edge.

“We quickly learnt that it doesn’t look wrong. The strips were located just beyond the sprayer area, which allowed us to be accurate with fertiliser and minimise any spray drift.”

Otherwise, autumn 2019 was disastrous. The farm team managed to establish some oilseed rape, but wet conditions prevented any further autumn cropping. The decision on extending the HLS scheme had to be made by the end of the year.

“That’s when we looked at the Assist project and realised that we could take the concept across the farm through a Mid Tier scheme, as well as make other changes. But rejecting the HLS extension for a Mid Tier application in July 2020 left the business with an 18-month funding gap.”

Harvest 2020 was a testing time. Mr Chandler stuck to his principles and fallowed 440ha for a year, establishing a summer cover crop for soil health purposes.

“We were then looking at how we could use two-year legume-based fallows and make them fit in the rotation. It was clear that you have to look at a system like this across five years and not one year in isolation – the hardest thing with the two-year options is getting them to fit.”

At this point, he also purchased a Horsch Avatar direct drill and lost one full-time member of staff, as he started a planned move to regenerative agriculture.

He admits to wondering whether a whole farm restructure would be a financial disaster. “We thought it would ruin us. But when you park it all up, you don’t spend anything on growing crops. Taking a step back has shown us that it will be possible to farm without BPS.”

He has also received encouraging early signs – soil organic matter, earthworm numbers, soil health (carbon dioxide burst) are all on the rise. The network of spiders webs visible on dewy mornings is proof that insect life is also thriving.

“We’ve had to believe in what we are doing. This is not about chasing the grants – it’s about doing it for the right reasons. We’re not using chemistry in the same way.”

How Mark Chandler is making it work

Mr Chandler had four main priorities when it came to using Mid Tier to achieve his integrated pest management objectives and prepare for the ELM scheme.

The acid test: Does it pay?

His annual funding through Mid Tier is £76,000, or £173/ha. The changes made see 16% of his arable land being taken out of conventional cropping, which means he is now looking closely at reducing his fixed costs.

“They need to come down by £50/ha if we’re going to maintain our labour and machinery costs of £319/ha. I think that’s achievable.”

Looking at the margins, he is quick to point out that none of them come close to winter wheat at over £500/ha. But the Mid Tier options are second, coming in at around £400/ha, ahead of spring crops, winter barley and oilseed rape.

There are costs associated with establishing in-field strips and they do need managing, with regular topping taking place in the first year and cutting and baling in the second, he points out.

“You have to give habitat as much attention as you give your wheat crop initially, and get it to fit – both practically and physically – into your farming system.”

Winter cover crops, which don’t affect the amount of cropped area, have increased his spring cropping margins by £60/ha. “We would be doing those anyway, but now they are funded.”

Mark Chandler spoke to Farmers Weekly as part of the AHDB’s Monitor Farm Mondays series. He is the host of the Petworth Monitor Farm, a participant in the Assist research project and a member of the Rother Valley Farmer Cluster Group.