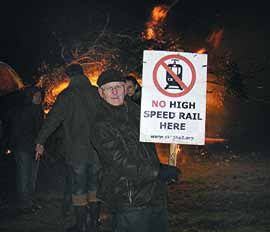 Urgent action should be taken by farmers affected by government plans for a £34bn high-speed rail link from London to Birmingham, experts have warned.

As many as 250 farmers have land along the proposed route of the HS2 rail link. But many still don’t know if they will be eligible for compensation – despite a government consultation launched on Monday (28 February).

If it goes ahead, HS2 will split many farms in two. Farmers joined campaigners in a beacon protest to mark the start of the consultation period. Some 30 beacons were lit, from Buckinghamshire to Oxfordshire, Warwickshire and Staffordshire.

Lizzy Williams, chairman of the Stop HS2 campaign group, said the rail link threatened to carve up the countryside, destroying rural livelihoods and causing irreversible damage to local communities and the environment.

The NFU and the Country Land and Business Association are both lobbying for compensation for affected farmers. A hardship scheme for house-owners has now been widened to include owner-occupiers of agricultural units.

But 46% of all property owners have yet to be told whether they will be compensated, according to a survey by rural consultants Knight Frank. Most felt they had received inadequate information, said James Del Mar, head of the firm’s HS2 team.

“Many people have been living under the shadow of the scheme since it was first announced in March 2010. For those with an urgent need to sell their properties, the uncertainty has been particularly unsettling.”

Farmers and landowners in particular should take a proactive approach towards any compensation schemes – including compulsory purchase, said Mr Del Mar. But they shouldn’t ignore any opportunities either.

“Many property owners will be putting all their efforts into campaigning against the scheme, and this is entirely understandable. But it is important that people also focus on ensuring they are in the best position if HS2 does go ahead.”

Transport secretary Philip Hammond said bringing Birmingham within 49 minutes of London would redraw Britain’s economic map by creating jobs and spreading prosperity. It was a “once-in-a-generation opportunity” to transform travel.