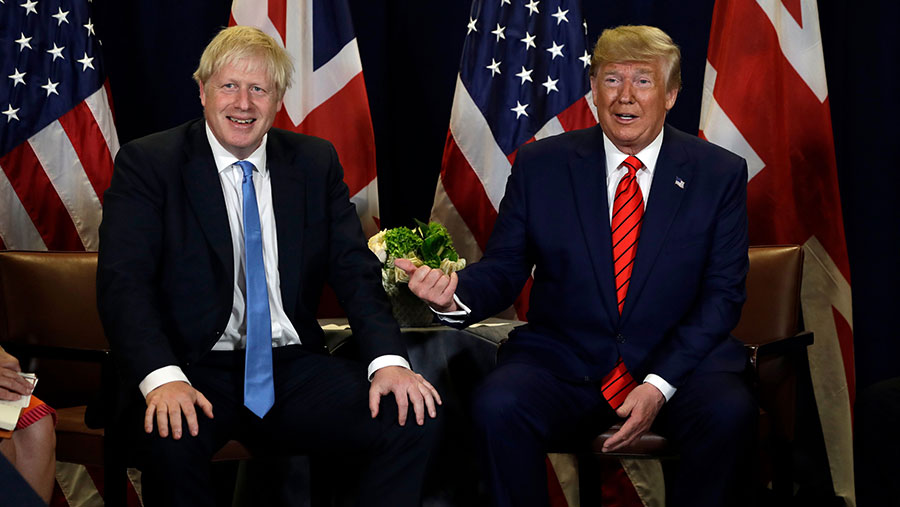 Boris Johnson’s government is ready to allow imports of US foods produced to lower welfare standards under a strict tariff regime to protect British farmers, according to reports.

Ministers are said to be considering allowing foods such as chlorinated chicken and hormone-fed beef on to UK supermarket shelves with a new so-called “dual-tariff” regime.

Under the system, products that do not comply with high UK animal welfare standards would be subject to high import tariffs.

The government source told the Daily Telegraph that the upper band of duty would remove any economic advantage foreign producers would gain by producing food to lower standards.

In addition, a lower tariff regime could be applied to imports that do meet high standards, such as organically reared, free-range meat, giving British farmers a competitive advantage, the report claims.

The dual-tariff system was adopted at a ministerial meeting on Monday 1 June, and it will be proposed to US officials as part of ongoing negotiations over a post-Brexit trade deal. It remains to be seen whether US trade negotiators are receptive to the plan, especially since US president Donald Trump opposes tariffs.

The report claims the plan is a “major victory” for Defra secretary George Eustice, who had opposed an alternative proposal by international trade secretary Liz Truss to reduce tariffs to zero over 10 years.

The NFU said it was seeking clarification from the government about the this proposal.

NFU director of EU exit and international trade Nick von Westenholz said: “We do know that the government made a manifesto commitment not to compromise on our high environmental protection, animal welfare and food standards in trade negotiations, and this commitment is explicitly stated in the government’s specific objectives for the US negotiations.

“Only three weeks ago, the farming minister stated ‘that all food coming into this country will be required to meet existing import requirements including a ban on using artificial growth hormones in beef. Nothing apart from potable water may be used to clean chicken carcasses’.

“We hope the government will continue to hold the line on these issues in any trade negotiations as they have repeatedly committed.”

The revelation comes as more than 380,000 people have signed an NFU petition which urges the government to introduce laws that prevent food being imported to the UK using methods that would be illegal to use here.

Meat processors in the US wash chicken in chlorine to kill bacteria. But the practice has been banned in the EU and therefore in the UK since 1997.

Ministers have repeatedly pledged that UK food standards will be maintained after Brexit. But British farmers remain deeply concerned that a flood of cheap food imports will undermine current standards and risk putting them out of business.

In January, the then Defra secretary Theresa Villiers pledged that no chlorine-washed chicken or hormone-treated beef will be allowed into the UK under any trade deal with the US.

But in February, Defra secretary George Eustice refused to rule out the possibility of importing chlorine-washed chicken or hormone-treated beef in any future free-trade deal with the US.

Last month, an amendment to the Agriculture Bill put forward by MP Neil Parish, seeking to legally require equivalence of standards for imported foods, was defeated in a Commons vote by 328 to 277 votes – a majority of 51.

The Agriculture Bill is currently on its second reading in the House of Lords before it is due back to the Commons in July.

A spokesperson for the UK government said: “The UK is renowned for its high environmental, food safety and animal welfare standards.

“We have been clear that in all of our trade negotiations – including with the US in our first round of negotiations – that we will not undermine our high domestic environmental protection, animal welfare and food safety standards by ensuring in any agreement British farmers are always able to compete.”