Once growers have decided to step up their environmental game to bring more biodiversity onto their farm, the next question is how you know which of the 15 arable options will bring most benefit for least outlay and effort.

Entry-Level Stewardship (ELS) is the bedrock on which growers now build an environmental strategy. Introduced five years ago, many agreements are up for renewal, while the CFE will bring many new entrants into the scheme this year.

With the loss of management plans, even old hands will need to introduce something new to qualify for the £30/ha payment – a big opportunity to score for CFE, says Mr Nowakowski.

“There are two options in the scheme that, if farmers do nothing else, will deliver the wildlife we’re looking for: Wild bird food mixtures and pollen and nectar mixtures.”

Wild bird food cover is essentially modified game cover. It is established in spring and delivers a range of seed in the winter.

“One of the biggest killers of farmland birds is starvation. There’s a hungry gap from January to March. We’re looking to sow mixes that produce a range of seed sizes so all birds get something they can handle – there’s no way you’ll get a goldfinch to swallow a maize seed, for example.”

Go for a mix of cereals and certain brassicas, he advises. “Fodder beet and fodder radish hold on to their seed while kale is inclined to shed. Millet appeals to small birds and linseed is high in oil.”

Like most arable options in ELS, wild bird food mixtures are best sited in field edges or in awkward corners – a woodland edge is ideal. Drill 1.5-2.5cm deep in a fine, firm seed-bed in late April, early May.

“Weeds are the biggest challenge. Make sure you remove as much beforehand as you can with glyphosate. With the right mix you can spray for thistles and take out grass weeds. But you may then be sacrificing one species in your mix for the sake of the other three.”

Apply fertiliser and watch for flea beetle. Once established, the cover should need no further attention until the following spring. “Aim to re-establish annually or biennially. In year two, mixtures with fodder beet can perform, but kale delivers a pitiful amount of seed.”

“Pollen provides fertility – it’s the brood-rearing fuel. Nectar is insect petrol, and insects are an excellent food for young chicks. We’ve lost 97% of our wildflower meadows. This is the best way to get them back.”

Choose clover, bird’s foot trefoil and sainfoin for the legume mix. Oxeye daisies, meadow buttercup, knapweed and mallow are good wildflower partners for grasses such as fescues and crested dog’s tail. “It pays to choose a specialist seed supplier and expect to pay £250-300/ha for the wildflower mix – you can spend less but it won’t do as good a job.”

The legume mix can be rotated with your wild bird food cover, while your wildflowers will thrive on a south-facing site. The best combination is to position the wildflower mix next to 2m of tussocky grass on the field edge with the legume strip next door to the crop – known as the sandwich margin.

Getting rid of perennial weeds, such as couch, creeping thistles and docks is essential before you sow. Although July/August establishment is OK for pollen and nectar mixes, spring is also fine. “The biggest mistake is to bury the seed – roll, broadcast, then roll again,” he says.

The seed may need help to get going – it is vulnerable to slugs, especially on heavy land, and annual weeds will overshadow it. “You may need to mow it up to three times in the first year, and try to remove the cuttings – a forage harvester is best.”

Your hard work will be rewarded in June of year two – the margins will erupt in a blazon of colour and teeming with life. Mowing annually in autumn or winter should help your sown species thrive the following spring.

Don’t underestimate the value of field corner and grass margin options, while conservation headlands can deliver just as much winter food as a wild bird food mix for less hassle, notes the Game and Wildlife Conservation Trust’s Peter Thompson.

“Management of conservation headlands has moved on. Now called unharvested cereal headlands, they work best if you drill them separately, making them the width of your drill.”

This is an untreated cereal margin at the outside of any crop that you leave unharvested for the benefit of birds. The open canopy and winter food source help grey partridge, yellowhammer, corn bunting and skylark, while insects thrive on the broadleaved weeds.

“It’s best established in spring, then you can glyphosate off your grass weeds over winter,” advises Mr Thompson. Drilling a low seed rate of left-over wheat will keep establishment cost low.

No fertiliser may be applied, and only spray for cleavers. “Don’t worry too much about the growth of weeds – you’ll find farmland birds will mop up most of the seed over the winter.” Top it off in the spring, cultivate and bring it back into rotation.

In a winter crop rotation, you will lose two years’ income from the margin. But on poor-yielding headlands, this won’t amount to much, argues Mr Thompson. “It’s a crop you’re used to dealing with and slots into your rotation.”

For shortwork, field corners and shaded woodland margins, natural regeneration buffer strips or field corner management are an option, although he advises sowing grasses. “These provide a very different habitat, favoured by hare, yellow hammer, and grey partridge. Natural regeneration may work best on sandy or chalky soils with a low weed burden, but blackgrass tends to take over on heavier sites.”

Mow it two or three times in year one to keep annual weeds at bay, while once a year thereafter in autumn or winter is all that’s needed. “Take out docks and thistles beforehand. Keep an eye out for ragwort, and you can spot-spray if perennial weeds get out of hand.”

Skylark plots have a reputation as a bit of hassle, but they are an ideal option for very large, productive arable fields. “They bring you more points/sq m under ELS than any other option. Skylarks use them as a runway, then nest in the crop. Just lift the drill to establish them or spray off with a knapsack – you need do nothing else. But keep them out of the tramlines so that the birds can nest away from predators.”

For those who want to do their bit, but cannot stomach the ELS forms, there are other easy wins that deliver wildlife benefit for less management input. “Concentrate on the in-field options – you’re probably doing a lot of them already. The important thing is to record this in the back of your CFE guide.” 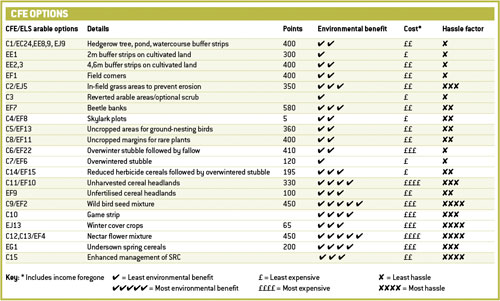