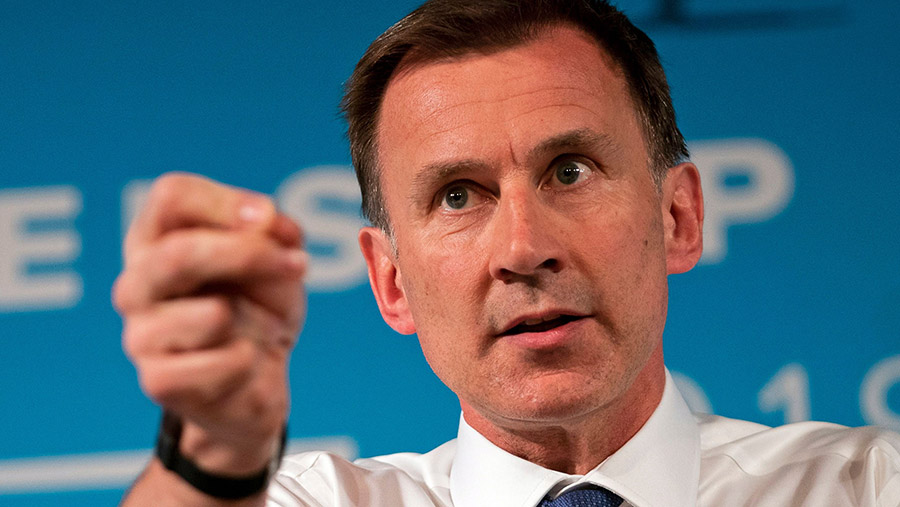 Mr Hunt said some of money would be used to help offset the impact of export tariffs on farmers if the UK leaves the European Union without a withdrawal agreement.

See also: Farmers will pay the price of a no-deal Brexit

But it is unclear how much would benefit farmers because the £6bn figure also includes money for the fishing sector and small businesses.

Mr Hunt made the £6bn pledge in a speech on his proposed no-deal preparations to the Policy Exchange think-tank in London on Monday (1 July).

Should he win the Tory leadership contest and become prime minister, Mr Hunt said he would immediately ramp up the UK’s no-deal preparations.

All government departments would be expected to act on the basis that the UK is leaving the EU without a deal on 31 October, he said.

A no-deal Cabinet taskforce would agree and publish financial support for UK industries that would be affected by tariff changes.

The Treasury would produce a no-deal relief programme.

This would include a £6bn fund for the fishing and farming sectors that export to Europe to ease the transition out of the European Union.

Mr Hunt said he would pursue the government’s existing approach to tariffs, balancing the benefits of liberalisation for consumers with appropriate exceptions to safeguard vulnerable industries.

And he pledged to protect the prosperity and wellbeing of communities across the whole UK.

More than one in four farmers favour a no-deal Brexit, according to a recent survey by Knight Frank.

But farm leaders have repeatedly warned that a no-deal Brexit would be catastrophic for UK agriculture – with export tariffs imposed on a range of agri-food exports.

NFU president Minette Batters said: “It is crucial that any future prime minister and their government takes every measure to avoid this outcome.”

It would significantly disrupt imports of key products, such as animal medicines, and could open up the UK to imports of food produced to standards that are illegal in the UK.

“While this sum of money may seem significant, it can only have a limited impact on mitigating the devastation a no-deal Brexit would have on farming and the British economy in the long term.”

The announcement recognised the unique circumstances of the rural sector – and the negative consequences of a no-deal for a significant number of farmers, said Mr Breitmeyer.

This was especially true for sectors such as sheep farming, where the deadline of 31 October could not come at a worse time of year.

But Mr Breitmeyer said the proposals were also unclear in some areas.

“Described as ‘temporary’, there is little detail on time frames or, most importantly, what follows once they are concluded,” he said.

“Is it longer-term relief or structural reform? Without further details then this could be viewed as simply another example of kicking the can down the road.”

Boris Johnson – Mr Hunt’s rival for the Tory leadership – has promised to take the UK out of the EU by 31 October “come what may”.

Tory Party members are due to start voting for their new leader next week, with the winner expected to be announced on 23 July.