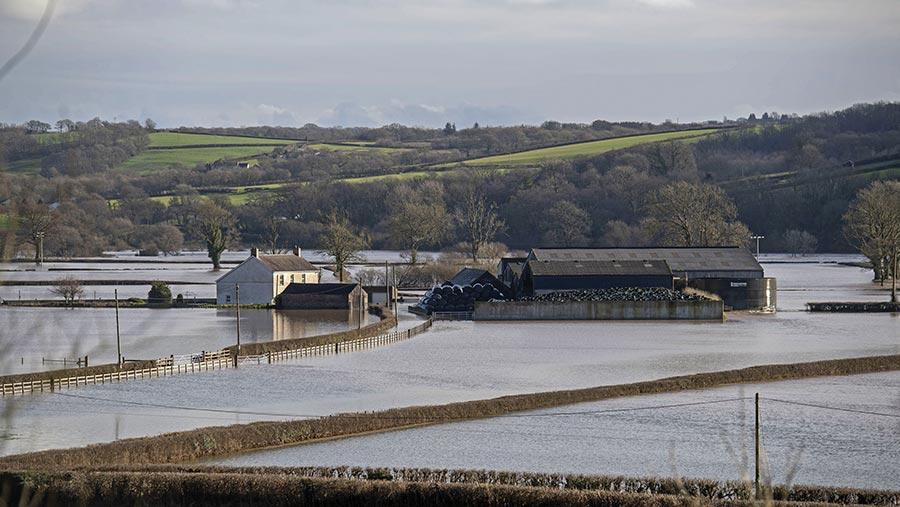 Widespread winter flooding has once again highlighted the urgent need for a national strategy which gives farmers a key role in water management, say industry leaders.

Large areas of farmland were once again left under water this week as heavy rain caused swollen rivers and watercourses to burst their banks. Northern England and Wales were among the areas worst hit – although other regions have also suffered.

See also: Why government must listen to farmers on flooding

In North Yorkshire, Newton Lodge Farm at Gatenby was badly flooded after the River Swale rose by 3m in 12 hours. Meanwhile, thousands of hectares of land were submerged when the River Croesor overflowed at Llanfrothen, near Porthmadog, Meirionnydd.

Unsettled conditions look likely to dominate during early February, with low pressure across the UK, the Met Office says. This should bring changeable weather to most of the country, with periods of rain, showers and strong winds at times.

Longer term, winters are forecast to become warmer and up to 30% wetter as a result of climate change. Heavy rainfall is also more likely. Since 1998, the UK has seen seven of its 10 wettest years on record. Meanwhile, summers are expected to be hotter and up to 60% drier.

Climate change is already making it harder to grow some crops and easier to grow others. This trend is expected to accelerate over the coming decades as higher temperatures and fluctuating water supplies encourage farmers to adapt their rotations.

An NFU report published this week argues that farmers and growers should have a central role in the better management of land and water to tackle the twin challenges of flooding and drought – while enabling growers and livestock producers to continue feeding the nation.

“Climate change is the greatest environmental challenge we face. A joined-up approach to flood and drought risk management will, alongside work to achieve our net-zero targets for greenhouse gas emissions, be critical in our approach to tackling this challenge.”

The NFU is calling for an integrated strategy that encourages the capture and storage of water when it is in surplus following flooding and wet weather events. This could then be used in agricultural production during times of hot and dry weather.

Of course, some farmers already do this. But the NFU says it is crucial that the government demonstrates leadership in developing a national framework for managing water – encouraging greater co-operation between farmers and other sectors, including water companies.

Mr Roberts said: “That framework should recognise water for food production and water for animal welfare as an ‘essential water need’ – worthy of the same status as that enjoyed by the public water supply sector.”

Flood and drought risk management needed to be more innovative and more ambitious, he said. It should include the construction of better, more innovative infrastructure – built reservoirs and dams as well as natural flood management features.

By establishing the agri-food sector as an essential user, the NFU argues that the creation of a successful integrated water management strategy would help secure a fair share of a vital resource for agriculture and horticulture.

It says a strategy would also develop the key role played by farmers and growers in protecting and enhancing the environment while driving technological innovation to improve flood management and increase resilience to climate change.

Similar arguments have been made by the Country Land and Business Association. It supports the view that food producers should be considered essential water users, and their supply should be prioritised by the government and water companies as highly as water for domestic users.

Government plans for water are contained in the Environment Bill, which is currently making its way – slowly – through parliament. It includes the development of joint regional plans for long-term water resource management.

The government says it will support farmers and other land managers in England to take a more integrated approach to flood risk and water resource management through the forthcoming Environmental Land Management (ELM) scheme.