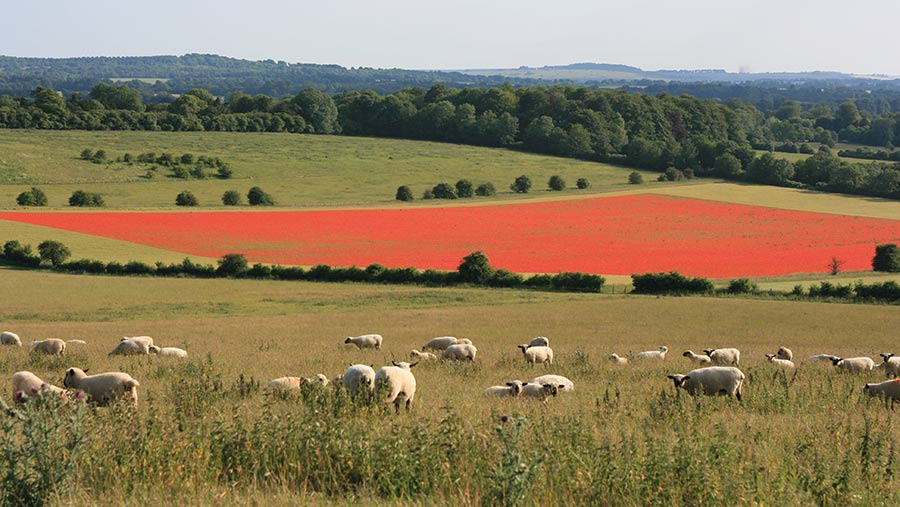 The 1,000ha Cholderton Estate has achieved climate-positive status by capturing more greenhouse gases than it emits, while showing that it is possible to run a profitable farming business in countryside teeming with wildlife.

A natural capital account, prepared using Defra figures, shows that the economic value of the public goods that will be generated by the farm over the next 60 years will be £125m (see panel below).

Involved in Defra’s Environment Land Management (ELM) scheme test and trials programme, the estate has a balanced system of farming with nature – with a healthy soil at its heart – and is demonstrating that reversing the drivers of climate change is possible.

As such, its approach forms the basis of a land management plan of best practice for mixed farms on chalk soils – relevant to many farms in the south of England.

Owner Henry Edmunds, who took over the estate 45 years ago, has developed a resilient farming business that secures its own fertility and biosecurity – mainly by using long-term leguminous leys and livestock manures on a rotational basis in a fully integrated system.

Natural capital, or the stock of assets at Cholderton, generates a range of benefits that are considered to have an economic value.

As part of the ELM test and trial programme, a natural capital balance sheet for the Cholderton Estate was prepared. It takes a long look over 60 years.

In other words, it would cost more than £100m to recreate what Cholderton has achieved.

Mr Edmunds highlights the rotation as a key requirement for improving soil fertility and bringing other benefits, including clean air and water, and stresses the importance of getting grazing livestock back on to farms.

“Mixed farms are the only way of farming profitably without harming the environment,” he points out. “You need both the grass leys and the animals to exploit them.” 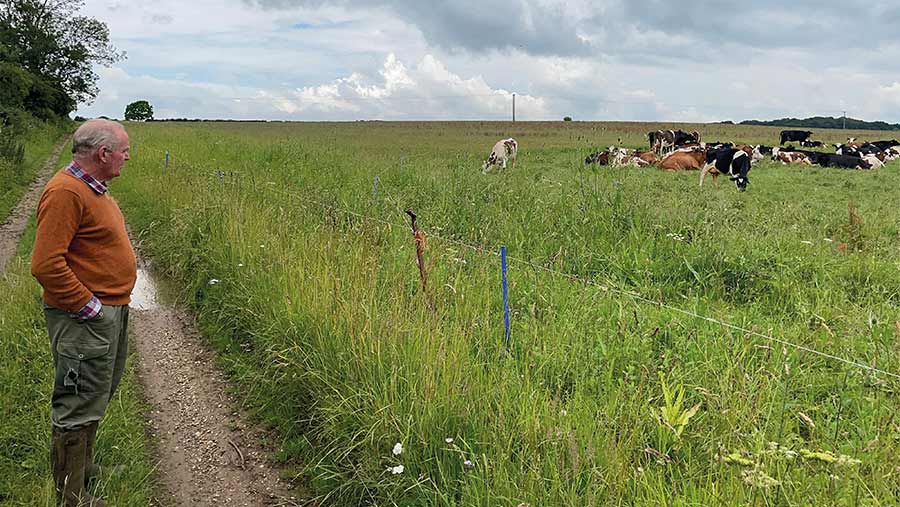 Dairy, beef and lamb enterprises at Cholderton, as well as an arable unit, mean that he has been able to build natural fertility in the soils, making the land more productive and pulling carbon out of the atmosphere and storing it in the ground.

His aim to be as self-sufficient as possible is working well.

The farm grows good crops for the livestock enterprises without the need for artificial inputs, with the legume sainfoin playing an increasingly important role on the thin, chalkland soils.

“Sainfoin is superbly adapted to light soils,” he says. “It is a key component of our herbal leys, which are in place for six years and grazed, before they are replaced by combinable crops for the next four years.”

Sainfoin’s other benefits are that it fixes nitrogen, is resilient to drought, produces faster-growing lambs and has flowers that are rich in caffeine, which help to protect bees against diseases, he adds.

“It also reduces the methane output from cattle that graze on it by 15%,” says Mr Edmunds. “It means we are producing meat and milk from pasture, in a sustainable way, with nature flourishing.”

The leys – which include sainfoin, lucerne, white and red clover, timothy, meadow fescue and cocksfoot – are the backbone of the entire system.

They are established by undersowing in spring barley, with their varying root depths helping to encourage soil biology and improve soil water retention.

No wheat is grown at Cholderton. Instead, oats and vetches are grown together for silage, while winter oats, spring barley and winter rye are produced for their grain and straw for the livestock – with the rye going to a specialised milling market. 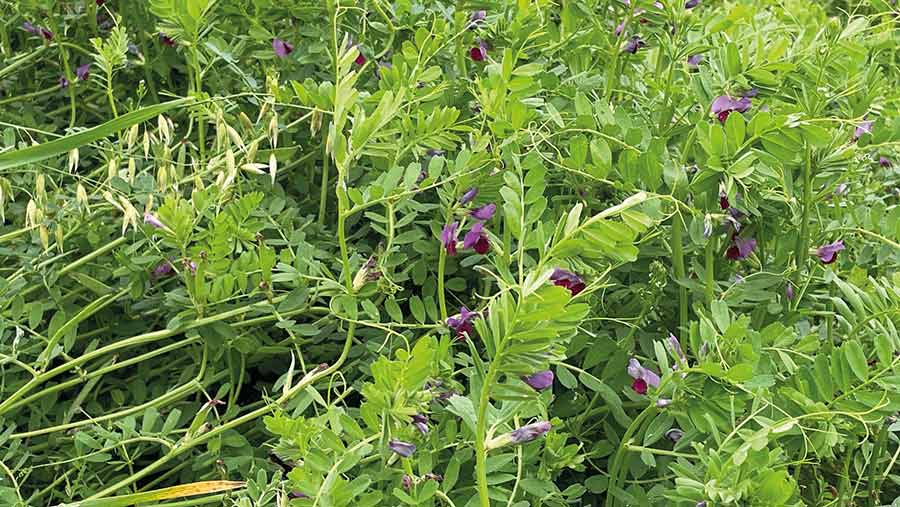 The oat and vetch crop at Cholderton Estate © Henry Edmunds

Crops are chosen for their drought resistance, suitability to thin soils and ability to compete with weeds.

No form of weed control is used in any of the crops – the low levels of weed species that do occur are not causing economic damage and help to support beneficial insect numbers.

Mr Edmunds admits that his system is seen by some as old-fashioned, but stresses that it works better for the environment. Using natural means to build resilience is proving to be a more efficient way getting fertile and productive soils, rather than buying in bagged nutrients.

“Climate change hangs over us and we all have to think about what we can do,” he stresses.

“Farmers can make a real difference by adopting regenerative practices – the farmed landscape gives us a tremendous opportunity to put things right.”

What does Cholderton deliver?

Soil organic matter levels have reached 12% in some fields. Grazing animals are used at low stocking rates on about 240ha of downland slopes sown with a permanent herb-rich pasture.

The remaining area is cultivated, with fertility provided by the microbial activity in the soil and the rotation.

The farm has avoided monocultures and promoted both animal and plant diversity for more than 20 years, so that the system is self-sustaining and not reliant on artificial inputs.

Optimum field size is 10ha, with most fields surrounded by flower-rich margins and hedges, to support biodiversity.

As the soils have improved, other benefits have arisen and been recorded:

The fields at Cholderton average out at 9.6% organic matter, which is equivalent to 128t of carbon sequestered.

The natural capital account has assessed the methane emissions from the livestock, fuel use, electricity consumption and sequestration of carbon in the woodlands, hedges and soils.

As a result, the Cholderton Estate is carbon positive and will continue to be so for at least the next 50 years.

A wide range of trees and shrubby species exists, although ash die-back is taking its toll. More trees with a high biodiversity value will be planted, so that their multi-functional outcomes can be optimised.

Half of the 116ha of woodlands are mature, with a total carbon content of 8,000t.

There is a wide range of wildflowers, grasses, insects, birds and mammals on the estate, with around 70 different plant species, 40 species of butterflies and 740 of moths being recorded.

Both rare and common species are found in such a bio-abundant system, which blends farming with conservation.

What is the Climate Challenge Cup?

An organic farming estate on the Hampshire/Wiltshire border was one of just six finalists selected from across the UK and the US for the Climate Challenge Cup – a competition run at COP26 to highlight those leading the fight against climate change.

By showcasing transformative partnerships between research bodies and local communities, it brings together experiences from across the UK and the US in two categories – achieving net zero and climate change adaptation.

The climate change adaptation category was won by the Green ERA Renewable Energy and Urban Farm in South Chicago, which has transformed a 3.6ha brownfield site to grow fresh food.

The UK-based Concrete4Change won the net-zero category by developing a technology that can extract carbon from the air and store it in concrete.