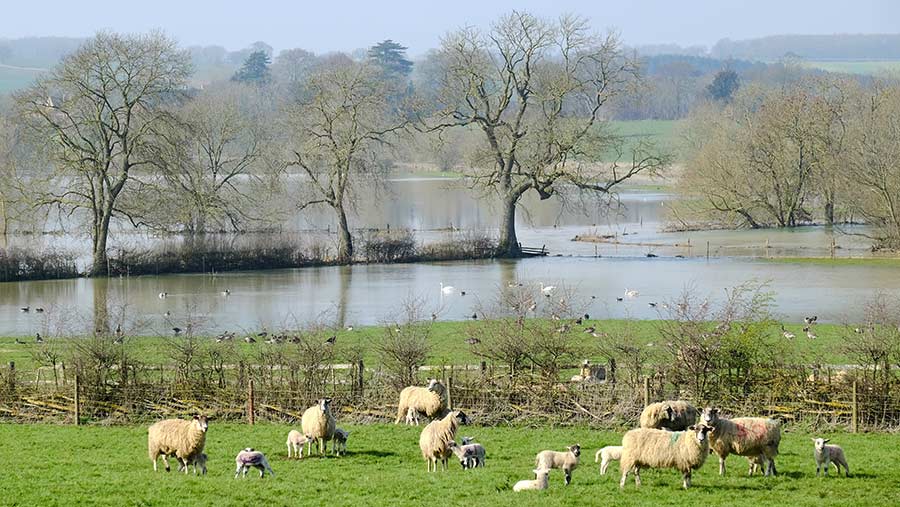 The UK government must do more to help farmers invest in their businesses to meet the increasing challenges brought by extreme weather, according to the NFU.

The union’s call for more government assistance to enable farmers to invest in their businesses was made as a new Met Office study showed the UK’s climate is changing, with an increasing trend for warmer and wetter weather.

A report by the forecaster, published on Friday (2 November), revealed further details about the UK’s climate since the 1960s.

See how climate change is affecting arable and livestock farmers:

NFU deputy president Guy Smith, who farms in St Osyth, Essex, on some of the driest land in the UK, said it was clear the weather was becoming more challenging for farming, but added that there were many things farmers could do to future-proof their businesses.

These include building reservoirs on farm to capture surplus rainfall over the winter months and store it for the summer and better farm buildings, particularly in the hills, to withstand severe weather.

Mr Smith added: “The key point for government is to realise that this will involve investment. With the loss of their share of the food pound and production levels falling, the ability of farmers to invest in their farms at this time is becoming more limited.

“Therefore, if the government is serious about helping farms become more productive, it should take seriously the challenge of helping farmers invest in their farms, either through tax allowances or through grants and loans.

“As our UK agricultural policy faces radical change with Brexit, this is something that should concentrate the minds of both farmers and the government.”

Soil erosion is already a costly problem for the UK’s farmers and more intense rain will increase soil losses from arable land.

Some fields are particularly at risk, such as those with maize grown on a slope and potatoes on lighter land.

However, there are practical measures that farmers can deploy to reduce soil losses, such as reducing the intensity of cultivations and opting for strip-till and no-till approaches.

On sloping fields, 80% of soil erosion occurs down tramlines, and work has shown that a loosening tine can dramatically cut losses. Other practical measures include installing grass margins to trap sediment before it reaches watercourses.

Soil health is another critical factor as a well-structured soil acts like a sponge and can absorb more of the heavy rain, thus reducing run-off.

Having less run-off will also cut the risk of flooding during periods of intense rainfall. Prolonged periods of flooding are especially costly to farmers, killing off crops.

Farmers can find out more about how they can make their soils more resilient to the changing weather in our Ultimate Guide to Soils in the 16 November edition of Farmers Weekly and on FWi.

Livestock farms are seeing the effects of climate change, whether through milder winter periods or wetter summers.

Heat stress: Temperatures of 35C can increase the energy maintenance of a cow by 20%, while reducing dry matter intake by 10-30%. A US study found that fans and sprinklers in collecting yards were worth 0.79kg of milk/day at temperatures above 27C.

How to combat heat stress in cattle to protect fertility

Liver fluke: Wet and warm summers present ideal conditions for liver fluke to spread as they depend on a host snail (Galba truncatula). Through the movement of sheep and weather patterns, liver fluke is spreading eastwards.

See advice on dealing with liver fluke: A guide to managing fluke on your sheep farm

Compaction: Risks of lost dry matter production through compaction in meadows and pastures from farm traffic is increased in wet weather. Wheel damage in second- and third-cut silage systems can be worth a 13% loss in dry matter yield, according to work done at Harper Adams University and SAC.

See also: 7 steps to assessing and managing your soil

Disease risk: Vector-borne diseases such as Schmallenberg and Bluetongue – both on the Culicoides midge – have come to British shores. Vaccines are available but costly and risk varies each year according to weather, breeding season and location.

If you are a farmer who has been affected by climate change, we would like to hear from you. Contact philip.case@proagrica.com