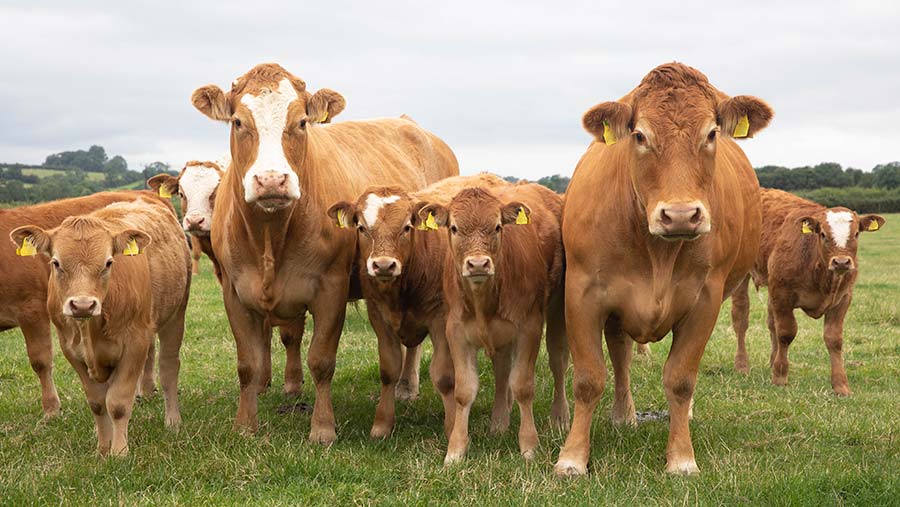 The cost of keeping cattle through to spring 2020 is likely to be lower than last year thanks to bumper forage yields, less concentrate feeding and lower cereal and straw prices in 2019, says Andersons’ consultant Charlotte Dun.

However, these gains will inevitably be eroded by lower farmgate cattle prices, which have been on a downward trend since autumn 2018.

See also: Top 10 most common cross compliance breaches and how to avoid them

Despite a slight rally in April and May 2019, the GB R4L steer price has fallen 48p/kg since mid-September 2018, the biggest drop for four years.

Some forecasts predict a 20% fall in red meat consumption over the next decade, so action must be taken to protect the sector.

Lower prices have benefited domestic beef exports, although the increase is mainly for cheaper frozen boneless cuts, rather than fresh cuts.

This suggests exports are partly clearing the market rather than a response to strong overseas demand for UK beef, Miss Dun says.

“UK imports on the other hand have declined, deterred by lower prices.”

She suggests the predicted increase in Chinese protein demand will help underpin the global market in coming months and years, while higher red meat demand – due to African swine fever in Asia – could provide significant opportunities for British red meat producers.

More immediately, it is increasingly difficult for farmers to produce positive returns on suckler herds.

AHDB figures show the top 25% of suckler herds make a net economic profit of 14p/kg on each finished calf and 27p/kg per store calf sold.

Compared with the bottom third, top-third producers buy lighter animals at a lower price per kilogramme, have higher growth rates over a longer feeding period and sell animals at a higher weight and higher price per head.

Bedding costs, for example, are four times higher among the bottom third performers.

“Suckler herd producers must re-evaluate their systems, maximising the use of grazing, while feeding to produce high quality carcases,” says Miss Dun.

Identifying a target market and building customer relationships is key to successful cattle finishing, she adds.

Analysts are forecasting cattle numbers to tighten by next summer, in line with calf surveys.

Small glimmers of hope shine through the despair as we come to the end of a thoroughly challenging year for British beef.

Average deadweight prices lifted 5p/kg to sit at 326p/kg at the end of November.

Profitable finisher prices are still a way off, although that will depend on individual circumstances and the price paid for stores.

While store prices appear to tick along nicely most weeks, it’s clear that everybody has been affected.

Across dairy calves, suckled calves and forward stores, the value of beef cattle is back 10% or more, compared to a year ago.

Meanwhile, the supermarket shelf price is down just 2.5% on a year ago, compared with prime cattle prices, which are 14% lower.

I would urge people to watch the Efra committee hearing on this issue, chaired by MP Neil Parish in October.