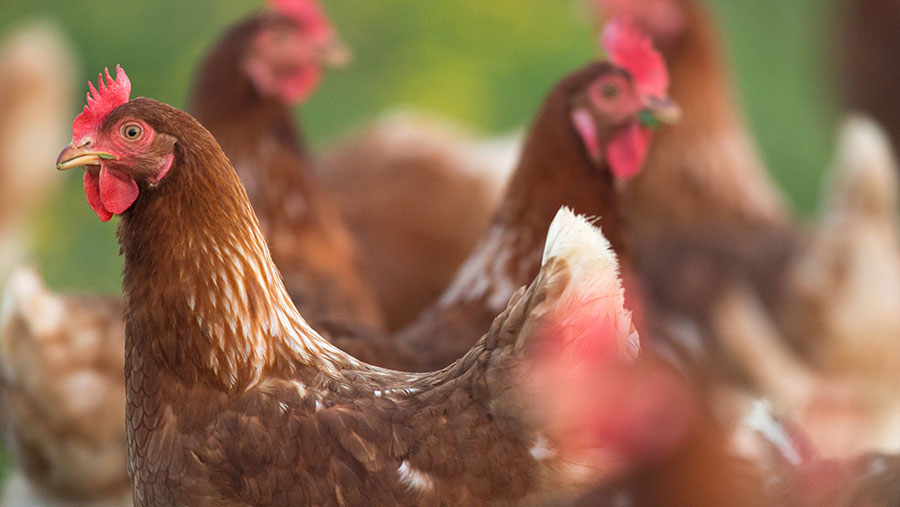 It has been a turbulent time for the poultry sector, with supply and demand out of balance, the looming possibility of tariffs post Brexit, and mounting pressure to reduce emissions.

“We are moving to a two-tier poultry sector; animal welfare and lower intensity versus increased intensity for reduced greenhouse gas emissions and maintaining cheap food on the table.”

See also: How to prepare pullets for laying in multi-tier systems

Monitor business performance carefully – on a p/dozen or p/kg basis – to identify areas for cost/efficiency improvements. Areas to focus on include:

Prices remain depressed, though, especially in the free-range egg sector, where the typical farmgate selling average of 69-90p/dozen is below or just above the average cost of production of approximately 80p/dozen.

Producers will hope continued growth of UK egg consumption, estimated at 13bn eggs annually, will support future prices. Also, with retailers and manufacturers moving to “cage-free” eggs from 2020 onwards (most from 2025), demand will rise, she says.

“There are effectively only four laying cycles remaining until the 2025 commitment. To meet increased demand, significant further investment will be required. This is another hurdle for many large-scale egg producers, who are still paying for the move to enriched colonies that came into force in January 2012.”

It is uncertain whether barn or free-range eggs will fill the gap in cage-free supplies, she says. “Free-range appears to offer improved animal health and welfare and a better environment for chickens, but the less-controlled environment often results in more vet and medicine use, higher mortality and reduced productivity.

“Perhaps it’s a case of consumer perception versus scientific evidence?”

The “Better Chicken Commitment” is gaining interest among retailers and could be an easy win for some broiler producers, given the high animal welfare standards and lower stocking densities already in the UK, Ms Hiscock says.

The scheme began in the US and is expanding across Europe, committing retailers and producers to higher-welfare chicken production.

This includes slower-growing chickens, lower stocking densities and a more “natural environment”. M&S, Waitrose and KFC are among those already signed up, with others set to follow.

Elsewhere, there remains uncertainty over the trade implications if the UK allows imports of chlorinated chicken from the US under a future trade deal.

Consumer reaction has been mixed, and both the US and UK are net consumers of white meat and exporters of dark meat.

Looking to future opportunities, Ms Hiscock says for those not part of the integrated broiler supply chain, diversification into higher-welfare, locally produced organic or free-range broilers or seasonal Christmas poultry could help add value by tapping into a growing “foodie” culture.

Correct marketing is key to profitability, though, so consider routes such as direct sales, social media and online marketplaces for these enterprises, she says.

Retailers and regulation dominate concerns over poultrymeat and egg profitability. It is a sign of how integrated the two sectors are.

Every year, more and more producers lock into contracts that offer managed margins – almost all broiler farmers do business like this, and it is increasingly common in the egg sector, too.

It will therefore be critical to look to how assurance schemes such as Red Tractor and British Lion react to calls for higher-welfare offerings.

It is little surprise that Marks & Spencer and Waitrose signed up to the “Broiler Ask” campaign, but KFC moving away from Red Tractor was more of a shock.

Farmers should look closely at the new standard and whether it would work for them, should they be asked to switch to it.

British Lion members have agreed new standards for barn production offering some clarity. Whether it replaces colony eggs on supermarket shelves is another matter.