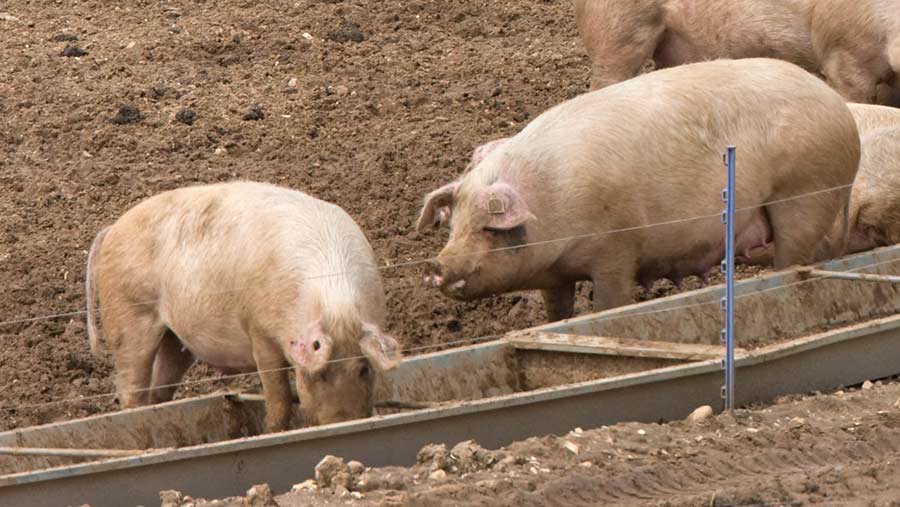 African Swine Fever (ASF) has taken centre stage in an interesting couple of years for the pig sector, and could drive new opportunities for UK producers in coming months, according to Andersons’ Harry Batt.

China, which once had more than half the world’s pig population, has lost more than 40% of its national herd to the disease, which has left a trail of destruction across Asia and Eastern Europe and shows little sign of ending soon.

Continued uncertainty around control and eradication of the disease may prevent producers restocking, which in turn could result in a pork shortage for a number of years and an increase in global prices, Mr Batt says.

“This creates an opportunity for the UK pork industry, both domestically and internationally,” he says.

Currently the UK is 54-56% self-sufficient in pork and exports about 284,000t each year, equivalent to 30% of domestic produce.

“In light of potential uplifts in profitability for the sector, a number of UK producers are already reviewing expansion projects to capitalise on the reduced global pork production,” Mr Batt says.

For domestic markets, he says the industry must improve the clarity of labelling on pork products to make it easier for shoppers to identify British produce in supermarkets.

Keep a lid on costs

While there is a relatively bullish outlook for global prices, Mr Batt urges producers to remain focused on managing and controlling costs.

The 20-30% drop in UK cereal prices earlier in the year helped relieve the pressure on feed costs, as will the disruption to trade between the US and China, and reduced Chinese feed demand, which has helped keep forward soya prices below £300/t.

“As feed contributes 55-60% of the cost of pork production, any reductions will have a significant impact on profitability,” he says. “Producers should look to secure feed at these low prices for as long as possible.”

Farmers should also build on the improvements in technical performance achieved in recent years and not let efficiency slip as feed costs fall.

AHDB figures show a 9p/kg reduction in the cost of production as a result of improved feed conversion rates (and reducing feed prices) since the end of 2018, although all parts of the sector have seen productivity improvements.

Despite this, Mr Batt says there remains room for improvement to narrow the gap between the top and average producers.

“It is this level of performance and detail which ultimately results in a business producing a profit, during times of depressed prices,” he says.

With greater focus on improving productivity across agriculture, Mr Batt says there may be future government support available to help producers.

Efforts to manage pig health in an era of increasing antibiotic stewardship will continue to be an overriding theme into next year.

Vets and producers have been praised for beating targets set by the Responsible Use of Medicines in Agriculture Alliance (Ruma). Use last year was 110mg/PCU (population corrected unit), compared with a target of 115.5mg/PCU.

Biosecurity will also remain a massive issue as the whole UK industry strives to keep ASF at bay.

A long-awaited surge in pig prices has followed the extensive Chinese culling to control the disease, a policy decision that has probably taken 25% of the world’s pigs out of the market.

In light of strong global demand, reports from UK pig farms are of pigs being sent to slaughter smaller at lighter weights – with pig hauliers set for some Christmas overtime.

However, domestic demand remains flat and noises from the vegan and climate change camps are worrying, regardless of system.

Outdoor producers were severely tested by 2019’s wet autumn and will be hoping for kinder conditions in 2020.